Te northern resident community is comprised of three clans A, G and R, with a total of 16 pods and 33 matrilines.

Matrilines are named first after the senior living matriarch of the group.
Thus as an example, the matriarch A11, her sons and daughters and grandsons and granddaughters, all belong to the A11 matriline. When reference is made to specific reproductive daughters in the matriline, and their offsspring, these "submatrilines" ar identified with the grandmother and mother's name. Thus, A35, daughter of A11, and A35's offspring are referred to as the A11-A35 matriline. Upon death of the senior matriarch, her name is dropped from the descendant matriline's name, unless sons or non-reproductive daughters of the matriarch survive, in which case the original matriarch's identity is retained in the matriline's name. E.g. A36 matriline. This matriline lost its matriarch Sophia (A36) in 1997. It now consist of only three males and will die out in time.

The range of the northern resident community includes coastal waters from the midpoint of Vancouver Island north to southeastern Alaska.
The orcas of the community are most commonly seen during the summer months in the area of western Johnstone Strait and Queen Charlotte Strait, off northeastern Vancouver Island.
In this region salmon funnel into narrow channels on their way to spawning rivers, and the orcas congregate here to intercept them.

Dialects
Different orca populatios can be distinguished by the kinds of underwater communication sounds the produce.
These vocal variations, known as dialects, can provide important clues about the relationships of groups and populations.
Each group a orcas produces a specific number and type of discrete calls, which together form its dialect.
Each pod of resident orcas has a unique dialect that can be readily identified by the trained aer or sound analyzer.
Within the resident population, pods with related dialects belong to a clan.
Different clans have no dialect features in common. 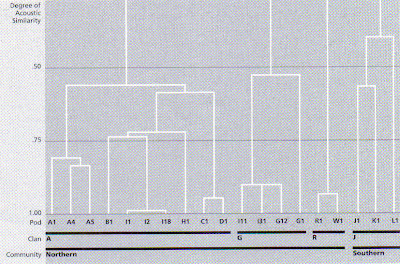