Our knowledge of the A36 family goes back to 1970, when an adult female with a severely damaged dorsal fin was one of the first orcas identified in the Johnstone Strait area. Called "Tulip" for the look of her fin & later "Stubb", she was given the designation "A1", i.e. the first identified member of the first identified orca family. When A1 died in 1974 the matriarch of the family became her daughter Sophia, A36, and the family became known as "the A36s". Eventually, in 1997, Sophia died. Today, the family consists of three brothers, A32 (Cracroft), A37 (Plumper) and A46 (Kaikash). Huge males with distinct dorsal fins and voices, they are an unmistakable presence in the "core area".
Source: Orcalab The video below shows a part of the harassing. The call repertoire of the A36 matriline was characterized by a high proportion of N5 calls and the exclusive use of subtype N9iv. Compared to the A1-typical N9, N9iv is significantly shorter and, after the initial buzz, shows a steeper rise towards the end, which gives it a “squeaky” quality. The first known matriarch of this matriline was the female A1, known as “Stubbs” because of her lopped-off dorsal fin. Identified in 1971 she was the first whale named in the study. (Source: Killer Whales Second Edtion) Remarks.
A46 with scar on his dorsal
Journal Cetacealab
Sunday 12 June 2005 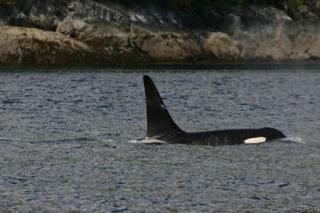 Early in the morning we received a report of Orcas at the south end of Campania Island heading nortwest along the shoreline.It turned out to be the brothers but this time we noticed something different. As we idled parallel to them we noticed something on the right side of A46 dorsal fin but could not be sure because of the sun was shining straight on his fin from the side. But later we saw it again and this time it turned out to be for real. Looks like a big scar halfway down his dorsal with 3-4 streaks going up almost to the tip. Almost looks like he hit the rocks while chasing a salmon along the rocks. It must have happened some time between this morning and June 7th, because we did not notice it the last time.